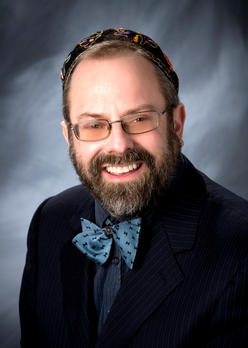 Rabbi Daniel Swartz has served as the spiritual leader of Temple Hesed since August 1, 2006. At Temple Hesed, he has helped in a resurgence of both breadth of membership and depth of activities, including a national award-winning outreach program, a food drive that collected more food than a Lackawanna County-wide food drive had a few weeks prior, and Purimshpiel productions known throughout the community for their combination of humor and social commentary.

Rabbi Swartz loves Talmud Torah, the teaching of Jewish traditions, history, and thought. At Temple Hesed, he has taught a variety of adult classes, including an upcoming adult b’nai mitzvah program. Most Shabbat services include discussions about the Torah or key prayers. He has also instituted a comprehensive family education program, which brings parents of all our religious school families together with their children three times a year for learning around issues ranging from “the search for God” to “Hunger and Poverty.”

He is also dedicated to the task of Tikkun Olam, repairing our world. Under his guidance, Temple Hesed’s already active social action committee has continued to expand their programs, including work on “greening” the congregation, one of Rabbi Swartz’s deepest passions. He has said, “I have helped people find a passion for their faith because I am passionate about Judaism. I believe our tradition calls on us to build a world that is not only more just but also where love for our fellow human beings can blossom.”

His work at Temple Hesed is a continuation of what he has undertaken for many years, both at Temple Shalom of Chevy Chase, where he served a variety of functions, including Family Educator, and at a number of prominent social justice organizations. For example, he was the founding Coordinator for Greater Washington Interfaith Power and Light, (GWIPL) which works to address moral and practical dimensions to energy use, Associate Director of the National Religious Partnership for the Environment, (NRPE), which works across faith communities on environmental issues, and as Director of Congregational Relations for the Religious Action Center of Reform Judaism, the Reform Movement’s Washington Office and social action arm.

Rabbi Swartz is the author of To Till and To Tend: A Guide for Jewish Environmental Study and Action, published by the Coalition on the Environment and Jewish Life, “Faith Communities and Environmental Health: From Global to Local,” for which he won the 2005 Award for Excellence in Professional and Scholarly Publishing from the Association of American Publisher, and a children’s book Bim and Bom: A Shabbat Tale. Rabbi Swartz holds degrees from Brown University in Geological Sciences and in Environmental Policy and has received numerous academic honors, including several prizes from the Hebrew Union College, the Senior Prize in Environmental Studies from Brown, and election to both Phi Beta Kappa and Sigma Xi. The most important thing in his life is his daughter, Alana.